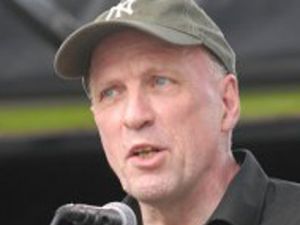 I have been denied entry to the United States. I was coming to America for a series of meetings and talks organized by the Aviation Justice Express. I had been invited, along with Scottish community activist Dan Glass, to talk about the successful campaign which defeated plans for a third runway at London’s Heathrow Airport.

However I never made it beyond JFK Airport. I was escorted off the plane by six law enforcement officers before being questioned for several hours by the FBI, the American Secret Service and immigration officials. I was then sent straight back to London. No reason was given.

Just why are the authorities so keen to silence environmentalists. Has, as a new book by Will Potter suggests, green become the new red? Are they now seeing a green under every bed planting seeds of revolution and sowing sedition?

The campaign against the third runway at Heathrow was the most diverse ever assembled anywhere in Europe to protest against an airport expansion. It included local residents, many of whose politics are far to the right of President Obama, politicians of all political parties as well as representatives of environmental NGOs and green activists, some of whom took part in non-violent civil disobedience. It was this coalition of interests, which I chaired, that persuaded Conservative-led Government, when elected, to scrap the plans for the expansion of Heathrow.

The aviation industry in the UK, perhaps in the whole of Europe, had never suffered such a reverse. Expansion at Europe’s busiest international airport had been denied by a fiscally-conservative Government on the basis that the environmental and economic arguments didn’t stack up.

If this process were to be repeated across Europe and the US, it would harm the corporate interests of the aviation industry. Potter argues in Green is the New Red that it is precisely to protect the profits of corporate interests that environmentalists are being targeted. He has written, “Much like the Red Scare and the communist witch hunts of the 40s and 50s, the Green Scare is using one word—this time, it’s “terrorist”—to push a political agenda, instill fear, and chill dissent”.

There may be something else going on here as well. The Bush Administration promoted the practice of excluding people from the US because of their beliefs: ideological exclusion. Although the Obama administration has made some positive strides towards putting an end to the practice, the American Civil Liberties Union is arguing that it should retire it for good.

A reduction in flying in the US would hit the profits of the aviation industry. I would argue that less flying is essential. Worldwide, aviation accounts for 4.9% of the world’s manmade climate forcings, roughly that of India, a nation of 1.2 billion people. And those aviation emissions are nearly all produced by the rich world: only 5% of the world’s population has ever flown.

Noise from aircraft too is a huge problem. A new book I have written, Why Noise Matters, just published in the US and the UK by Earthscan, shows that aircraft noise disturbs millions of people across the globe.

But these are the messages the American aviation industry doesn’t want to hear. They threaten its profits and corporate power. It doesn’t want the public to know that high-speed rail could potentially provide a realistic alternative to many short-distance flights in the US. Easier to silence the messenger. But the message will be heard. The tour will go on. Dan Glass and myself will be Skyped into the events we were due to speak at across the country.