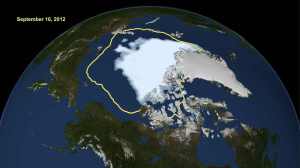 Arctic sea ice is at an all-time recorded low in 2012, and dirty aviation plays a part. But new research shows that simply rerouting plane flights around the Arctic will delay Arctic sea ice melt, prevent 1.75-2% of global warming, and have a 50x return on investment in the US alone. Will governments and airlines listen?

Data from NASA and the National Snow and Ice Data Center shows that the ice around the North Pole is at the smallest ever seen since we began to measure it — 18% lower than the previous historical low. This, in turn, causes the earth to absorb more sunlight and get even hotter.

New research from Stanford atmospheric scientist Marc Jacobson and others shows that “the most abundant direct source of black carbon and other climate-relevant pollutants over the Arctic is cross-polar flights by international aviation” —but rerouting flights around the Arctic could help solve the problem:

“To study this issue, a model…was used…that treated cross-polar flights and flights rerouted around the Arctic Circle…[M]ost of the associated black carbon and other emissions were removed faster because they were now over latitudes of greater precipitation and lesser stability.…The Arctic reduction in pollutants, particularly of black carbon, decreased Arctic and global temperature and increased Arctic sea ice over 22 years.”

So if you were to reroute planes around the Arctic:

Yes, you read that right: this one simple change could reverse 2% of global warming over the course of 22 years. But wouldn’t it cost money to make the change? Researchers looked at that:

“Rerouting may increase worldwide fuel plus operational costs by only ~$99 million/yr, 47–55 times less than an estimated 2025 U.S.-alone cost savings due to the global warming reduction from rerouting.”

How would the US save $50 for every $1 invested in rerouting planes? Researchers look at the cost of dealing with global warming (“severe-storm damage, real estate loss, energy-sector costs, and water costs”). If the whole world spends about $99 million/year to avoid flying over the Arctic, then by 2025, Americans alone would be saving $4.7–5.4 billion every year from expected global warming damage. The savings would be substantially higher if you include every other country in the world.

We know that the aviation industry is responsible for 4.9% of the human causes of climate change, but addressing that problem is huge and thorny. But this is relatively simple: it’s a change that would affect only a small proportion of flights globally, and offers a tremendous bang for the buck.