STAND: Shut This Airport Nighmare Down 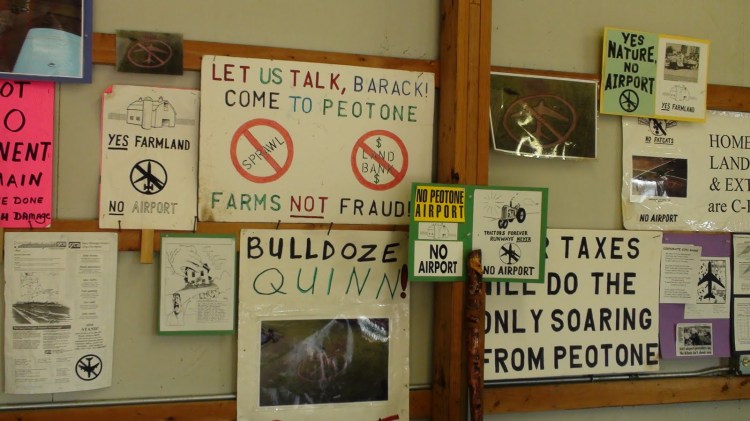 Anthony Rayson, the co-founder of STAND (Shut This Airport Nighmare Down), writes about their Aviation Justice Express event last week in Peotone County, Illinois, where residents are trying to defend their community from a massive new airport project, over three times the size of Chicago O’Hare. In an unfortunate turn of events, politicians have pitted community against community, trying to appease impacted Chicago airport neighbors by creating the same problem elsewhere, in nearby Peotone County.

We had a good gathering of about eighty people, composed of “footprint” residents and their supporters for our Harvest Fest. It was a beautiful autumn afternoon, Sunday, October 9th, during the actual harvest moon period.  Tables and walls were festooned with information and the history of the fight against the Peotone Airport.  People socialized and caught up on eachother’s lives, enjoying music, food prepared by a local high school group, and discussed the latest moves concerning the state of Illinois’ attempt to force eminent domain on these farms – even in the midst of this economic meltdown and the fact the FAA had yet to even decide on the efficacy of this project.

Reporters from three suburban newspapers came, as did two reporters who do an online news service:

Halfway through our event, one-hundred year old Anthony Rudis arrived and addressed us for a good twenty minutes.  His award-winning farm is at the very heart of this area and he sounded the call to continue our resistance.  Soon after that, we attempted to Skype John and Dan in at the barn we had gathered in, but could not make a connection.  So, we called Dan and put him on a speaker phone and we talked about the issues for a while.  We tried to do the same with John, but could not make a connection, but I was able to speak with both of them the next two days at events in Chicago. One was held at the Kent Law School in downtown Chicago and the Tuesday night event was at Universidad Popular, a community center, in the latino community of Little Village, located on the southwest side of Chicago.

The Peotone Airport is a unique (and huge) sprawl offensive.  It is not industry driven, but rather, a purely political creation. It is touted as being a huge job-creator that will revitalized a depressed southland, which has seen the steel factories (and others) be shipped overseas, and this was way before the 2008 economic meltdown.  The site they have chosen for this massive project (they want to eventually acquire 22,000 acres – almost 37 square miles!) is located in prime farmland, far from any type of necessary infrastructure that would be necessary for it to function as an airport.  They also intend to build a tollway to and through it, on into Indiana.  Many warehouses and rail yards would glut the area with heavy truck and train traffic, destroying the environment and livability of this still pristine area.

Residents have been fighting this a long time, as it was first proposed in 1968.  The last fifteen years or so has been a real battle.  We have put on forums, written newspapers, done innumerable direct actions, gone down to the state capitol – one time we drove a semi truck (owned by an area milk farmer) with a stirring mural painted on it of a young boy standing his ground against a bulldozer, and parked it in front of the capitol, as we held a press conference there.  We picketed the governor’s mansion and my son and I confronted him in his inner office.  We’ve driven loads of corn and soy beans to the board of trade, downtown.  We’ve held huge parades and gone to countless meetings, etc.  I’ve also cut four crop circles, including one on the Autumnal Equinox – September 22nd.  Wherever the politicians go to try to promote this thing, we are there, too.  The area is bright with 4′ x 4′ NO AIRPORT yard signs.  We’ve networked and worked with other environmentalists and social justice groups and citizens fighting similar affronts to their communities by the government.

We have a lawsuit against forcing eminent domain in lieu of the go-ahead as a viable project that will be adjudicated in January. If we can stop this aggressive landgrabbing, we may be able to pull the plug on this enormous money pit / boondoggle once and for all!

— Anthony Rayson, co-founder of STAND – Shut This Airport Nightmare Down

One thought on “STAND: Shut This Airport Nighmare Down”